As Hurricane Isaias barreled up the coast, I rushed outside to pull a towel from the line. The wind was already whipping the swamp maples, spindly and lithe, bending them in the force. The usual, gentle rustle of leaves had turned into a roar that accelerated with each gust.

Acorns were dropping from the oaks, hitting the porch roof like buckshot. Fern fronds ruffled and rearranged, rebellious. I could sense the foreboding – unknown and exciting – as energy swirled around me. It was then that commonplace objects assumed the presence of evil.

A dead bird lay by the bulkhead – gray feathers and a beak, strewn on the mossy ground. Our indoor/outdoor cat had obviously been hunting, and I scolded her as I ran through the house and out the side door to get a large metal dustbin from the garage.

I rounded the house by way of the front and could feel the anticipation. As the skies darkened, the color of our tall garden phlox deepened. A pale, yellow swallow tail butterfly clung to one of the blossom heads, bobbing with it, wings a-flutter. How strange this was. I had seen only one butterfly all summer long, and here was this elegant creature, edged in black, seemingly blown in by the storm. I watched until it lifted off for the back yard.

Following it, I scooped up the dead bird and hurried toward the woods, trying to balance the dustbin without spilling the remains. I became keenly aware of the equally dead branches caught in the trees, potential spears as I ran under them. The clouds were billowing, and I could feel change on my skin, now damp and cool, where hair stood up in anticipation.

As I ran, I noticed other feathers, too. Soft tufts from the underbellies of wild turkeys, caught in the grass. So many feathers all over the yard. When did they get here? I knew our visiting turkeys molted in late summer, but these feathers were profuse. An omen, maybe? I thought of Jack Nicholson in the movie, the Witches of Eastwick, where he was cursed to spit out cherry pits and poofs of down.

I buried the dead bird at the side of the woods and covered it with pine needles, saying thank you as I usually do, for gracing us with its presence. As I retraced my steps, the old pine creaked, sending immature pinecones earthward.

I returned to the house, on edge, but invigorated. The sky was threatening now. All we could do was wait. I knew I had witnessed what writers only hope to achieve – those fleeting moments when characters and readers are caught in suspense and expectation.

The rains came as predicted. First a few splats, then walls of water. We heard a dull thud in the woods and envisioned a large limb falling. A tornado warning scrolled on the TV screen as our cat hunkered down in the porch. We closed the north windows, and then the others, expecting our lights to flicker. But they did not. With all the intensity of a good plot, the storm peaked and subsided. 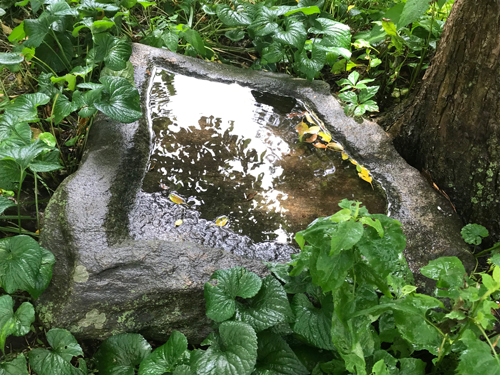 I ran outside in hopes of catching a rainbow but no luck. The trees were still dripping. A puddle had formed on the brick walkway. The birdbath was overflowing, as were the downspouts, gushing into the garden, escaping their designated path. The grass glistened; my feet got wet. The air was cooler now, fresh. The wind had lessened, and the sound of tires on wet pavement was amplified by the stillness everywhere else. I breathed in deeply. Ozone. Nature’s skill at foreboding was not lost on me.

2 thoughts on “The Art of Foreboding”