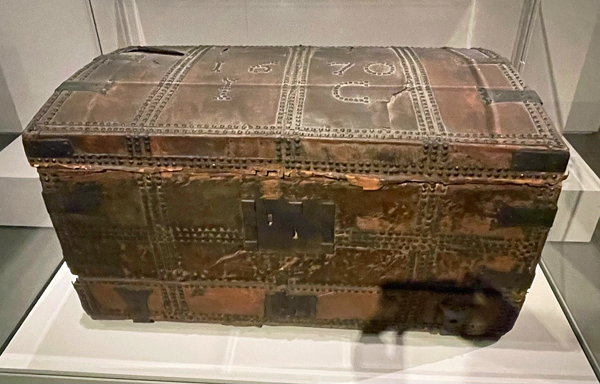 When I was a child, I had a recurring dream – a nightmare, really – of hiding under a bed and hearing footsteps approach. I was terrified and would wake up shaken. I had no idea what sparked the dream, where it took place, or who belonged to the footsteps – until years later, when as a young teenager, I visited my paternal grandparents’ house. There I saw the exact same room — a basement laundry room with a cot in it. I can only assume that as an infant, I was set on the floor in a carrier, while my mother or grandmother did the laundry. My dream played out from the precise perspective an infant might have (looking upward) and no doubt, reflected the anxiety I must have felt when someone came into the room – only able to hear them but not see them. That moment of recognition, years later, was both eerie and enlightening. I never had the dream again after that.

Yesterday, I visited the wonderful Peabody Essex Museum in Salem, MA and had a similar, jarring experience. One of the exhibits focused on the witchcraft trials of 1692/93. Among the many fascinating items on display, was a wood, sealskin, and iron chest belonging to magistrate, Judge Jonathan Corwin.

Corwin’s son was supposedly ‘afflicted’ with witchcraft and Corwin’s mother-in-law was accused of being a witch. (She was not arrested, likely due to social connections.) History doesn’t reveal Judge Corwin’s thoughts about these trials because he said very little. His role was that of an ‘oyer and terminer’ – one who hears/listens and determines. As was typical of the time, he was a respected, educated, and affluent member of the community but had no formal legal training. 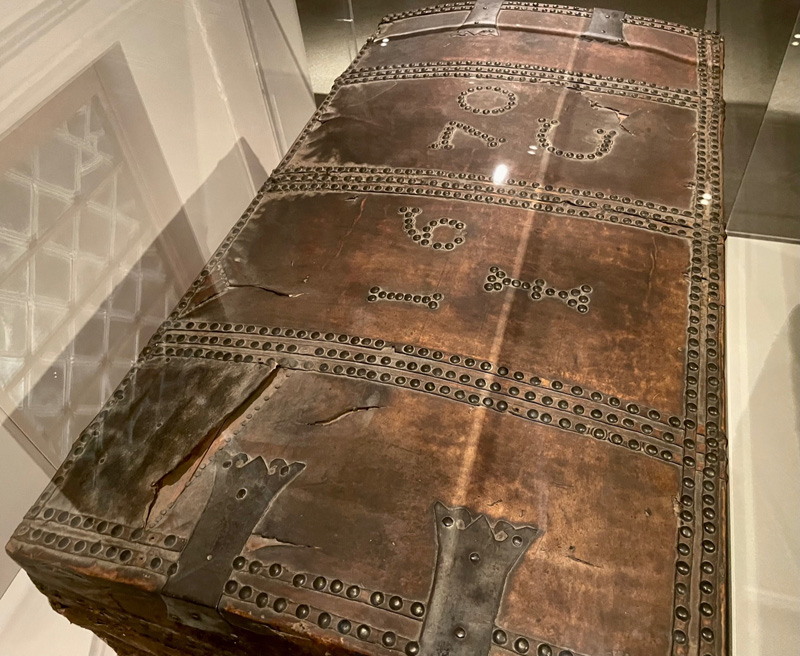 However, seeing this chest hit me like a bolt of lightning because I had written about a very similar one in Tory Roof. Although the letters on the Corwin chest are “JC,” (using the old-fashioned “I” for a “J”), at a glance, they resemble the “TC” I describe in my book. While I say “gold leaf” for the monogram, these initials are spelled out in nail heads, but in essence, this is the chest I saw in my mind.  I probably should have described it more fully as I now see beautiful detail, but here is the context in which it is introduced:

“As the trio approached the house in the mid-day light, it was easy to see that the east wing was almost as large as the main house. They entered quietly, respecting the silence of their surroundings, and walked down the east wing corridor. Sarah poked her head into one of the rooms, spotlessly swept and basking in the sun. Were it not for a spider web in the doorframe, the room was move-in ready.

There she saw an old trunk with a gold leaf ‘TC’ painted on the lid. ‘Thomas Covington,’ she thought, ‘or maybe his son Thomas II. Could even be his grandson, Terrence.’

After a leisurely tour, Sarah and her clients went their separate ways. That evening, she noticed a rosy glow on her left cheekbone, under her eye. ‘Strange,’ she thought, ‘Maybe a spider bit me.’ But, the sensation didn’t hurt. It felt more like a kiss.”

I’m reminded that there are many theories about self-fulfilling prophecies and the law of attraction – encouraging us to envision positive things to help make them happen. But this experience was just the opposite. I wasn’t trying to pull from the universe to affect my life, but rather, I put my imagination out into the world, and the universe delivered the real thing. Not sure what this phenomenon is called, but it’s very intriguing.