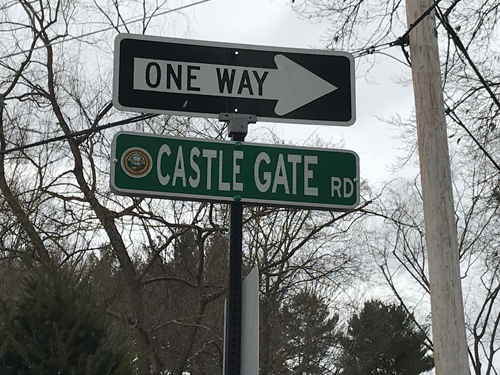 As someone who respects words, I try to avoid phrases like “all” and “always,” but in the case of following a lead, I’m convinced, there’s no end in sight. Journalists and researchers are trained to recognize a good lead, knowing it can spark a story, uncover a wrongdoing, or reveal little-known facts. But sometimes an author finds herself on a path she hadn’t expected.

Such is the case of the many-tentacled story that took place close to my home, thousands of years ago, hundreds of years ago, decades ago, and still, today. The story concerns The Saxonville Mills, in Framingham, MA, developed in the mid-1800s by an entrepreneur named Michael Henry (Harry) Simpson. Simpson lived in Boston with his wife and five children, until she unexpectedly died in 1878. 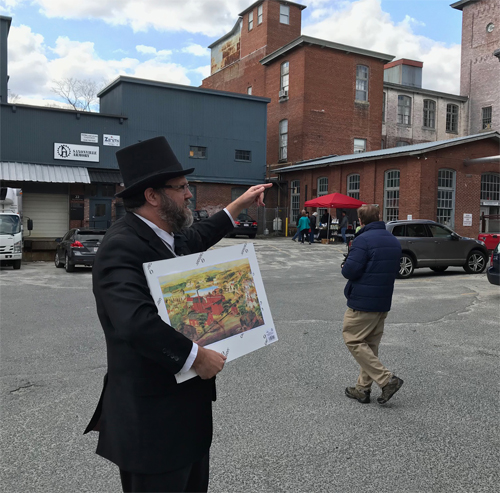 Four years later, in 1882, at age 72, Simpson married Evangeline Marrs, 45 years his junior, and built her a mansion on a hill in the nearby village of Wayland. The mansion, constructed of brick, wood, and stone, spanned 200 feet and overlooked Dudley Pond, which served as a source for running water. The grounds included a stable and bridle paths because Evangeline liked to ride. Unfortunately, two short years after completion, Simpson died of heart failure, leaving Evangeline a $10 million estate.

But that is only part of the story. Evangeline Marrs went on to lead a fascinating life. A person of means, she engaged in charitable work on behalf of war refugees and Native Americans. She sold real estate and championed women’s rights. She eventually left Wayland, and in 1889, met Elizabeth Rose Cleveland, sister of President Grover Cleveland. Rose had served as First Lady for her unmarried brother and, as a poet and essayist, had become a prominent figure in her own right. 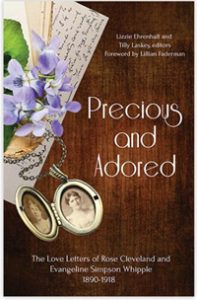 A new book, called Precious and Adored, published by the Minnesota Historical Society Press, details the romance between Evangeline and Rose through a series of love letters, following them on travels that took them around the world.

The connection to Minnesota derives from the fact that in 1890, Evangeline married Bishop Henry Whipple, the first Episcopal Bishop of Minnesota, who shared her interest in humanitarian work. Although he died in 1901, Evangeline remained in Minnesota for nine years following his death. In 1910, she reunited with Rose and together, they moved to Italy. They remain there still, buried side-by-side, in the town of Bagni di Lucca.

But the story diverges again, as good stories do, causing us to wonder what ever became of the mansion built by Mr. Simpson. One source says that Evangeline turned the building over to Simpson’s son, Francis, but does not state how long he maintained it. Other sources describe the building as becoming a “roadhouse” (and worse) at the turn of the century and a speakeasy during Prohibition. Some even claim it was the scene of a shooting.

I have yet to find the dates and changes in ownership which led to the transformation of the property, but one can assume that sometime after the Great Depression, the property was reclaimed and turned into the elegant establishment called “The Mansion Inn,” known affectionately by locals as “The Castle.”

The Wayland Historical Commission provides excellent detail about the post-War heyday of this Inn and its operation well into the 1950s.

The Wayland High School Project does an impressive job in providing photos and anecdotal input, and the Bryant Funeral Home website offers a similar account with additional details and images.

Wicked Local excerpts “Wayland A to Z: A Dictionary of Then and Now,” edited by Evelyn Wolfson and Dick Hoyt, and reprinted by the Wayland Historical Society in 2009, which offers additional perspective.

Today, some older Wayland residents still remember The Castle. They tell of a dark, opulent interior, grand mahogany staircase, the statue of Venus in the heart of the Venetian Room, and a magnificent dancehall with a spring-loaded floor. Others talk of wrestlers who trained on the lawns and big bands that came up from New York City to entertain the guests.

There are those who recall childhood memories of sitting on the carved granite lions that graced the estate and being paid ‘real money’ to pull frogs from the pond, since frog’s legs were on the menu. In these quiet outskirts of Boston, the Mansion Inn became a destination for the upper echelon and a source of employment for locals, until a fire erupted on March 24, 1956. Impeded by a spring snowstorm, firefighters were unable to control the blaze that spread from the kitchen and eventually, engulfed the entire structure. The Inn was razed.

Although the owner considered rebuilding, neighbors voted it down as “too noisy.” Excavation began shortly thereafter, and by June 1958, developers were turning the soil. This is where the story takes another dramatic turn. It was then that layers of ash and artifacts began to surface – blades, bowls, and carved stone tools — thought to be of Native  origin. Local children and curiosity-seekers descended and removed these items before archaeologists from the R. S. Peabody Foundation in Andover could preserve the find. Vast knowledge was lost. Thought to be the site of a 3,000 to 4,000-year-old cemetery and crematory, D.S. Byers painfully describes the incident as “The Rape of Wayland.” By December 1959, it was too late. Bulldozers had leveled the land, dropping it 8 feet, to make room for modern housing.

Able to pin the location on a map, I decided to drive to the area which I’ve, unknowingly, passed hundreds of time. I found Mansion Road which took me on a scenic drive around the lake 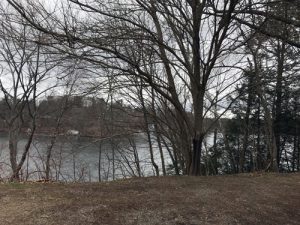 but not quite to the destination.

I retraced my steps and then saw Castle Lake Road, and upon entering, noticed the two stone pillars described in historical accounts. I drove down the road—it was a blustery day – and could feel the chill of history. While I have yet to locate the exact quadrants where the Mansion stood, there is no doubt I was in the right place. As I returned to the main road at the south entrance of the original property, I noticed the gateposts were carved, as documented, with the letters “H” and “Y” to commemorate Harvard and Yale, where Simpson’s sons and son-in-law attended school. 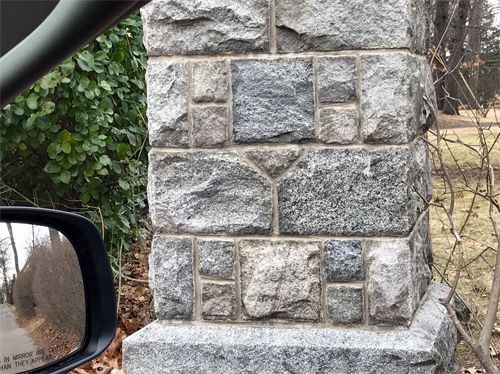 I sat there for a moment, imagining the glitterati arriving in highest style and feeling a sense of sadness for a landmark lost.

Now, I would never have pursued this story were it not for serendipity. I had been running ads at a small movie theatre which apparently caught the eye of a local author. She contacted me and we met at a coffee shop. She descends from prominent New England lineage and is writing historical fiction based on events that occurred in her family. In trying to suggest potential publishers, I remembered the book about Evangeline and Rose and sent her a link.

But there’s one last bit of the uncanny:  As I explore this story, I conjure up romantic nights fueled by liquor and money. I can almost hear the slow jazz and smell the smoke of cigars and cigarettes. There’s perfume in the air and a hint of prime rib. Women laugh. Men boast. This is the good life that makes people forget economic depression and war. 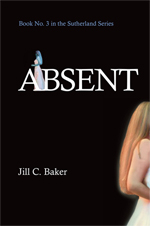 It dawns on me, slowly, that I’ve been here before – not to this exact place in this exact town, but to a similar venue in New York City – a club described in my third book, Absent, which was started long before I heard this story and which will debut shortly. You see, my main character, Carter, on one of his attempts at self-discovery, is regressed to the Roaring Twenties, where he hobnobs with the rich and famous and falls for a woman named Rose.