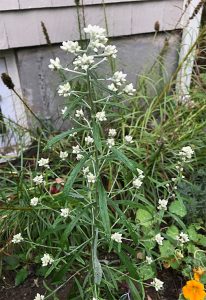 I’m not sure if writers view the world differently – perhaps seeking deeper meaning or symbolism in simple things – but something happened that made me think:  in my garden, a strange plant sprung up that I didn’t recognize and had not planted.

I took a photo and posted it to a local Garden Exchange group on Facebook, and the first responses suggested either Swamp Milkweed or Rabbit Tobacco, neither of which was familiar to me. Of course, I Googled those names, and have concluded it may be the latter, because there is a very subtle sweetness to the leaves.

However, in my research, I find that Rabbit Tobacco is surrounded by mythology which increases my puzzlement as to why it suddenly appeared. While some sources say Rabbit Tobacco is native to midwestern fields, others say it thrives where rabbits gather. In that I do not have a midwestern field in my front yard and have seen only a couple bunnies in recent years, I’m not sure of either.

In trying to learn more, I watched a YouTube video by an herbalist and spiritual practitioner, who praised the plant for its medicinal properties, but also warned against bringing it into the house without proper spiritual safeguards. Why? Because this plant, also known as “Sweet Everlasting,” is said to connect the worlds of the living and the dead, supposedly because its fragrance ‘comes to life’ when it is dying.

With that bizarre thought, I turned to a website that focuses on Alchemy and learned more about the mystique surrounding this plant. According to this site:

The Latin name is pseudognaphalium obtusifolim, and the plant is well known in Native cultures. The Sioux credit this plant with acting as a “psychic collector” in picking up the good or evil attributes of people near it. The Creek use a decoction of the leaves to wash elders who cannot sleep well. The Cherokee and Menominee (who honor the plant’s power by calling it ‘Owl’s Crown’), smudge their homes with its burning leaves to evict spirits of the dead. The Yuchi and Seminole mix Rabbit Tobacco with eastern cedar to help ghosts move on and to protect babies, new to the world of the living. One modern interpretation of its unusual persona is based on the herb’s role in treating asthma, connecting life (breath) with death (suffocation). Another theory touches on the herb’s reputed ability to treat insomnia, very much a twilight between wakefulness (living) and sleep (a symbolic dying). 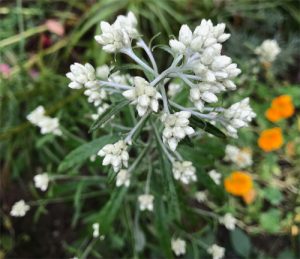 What all this has to do with my garden is unclear, but now that I know of the magic surrounding this plant, I eye it warily. I’ve since learned that it is harvested by the Yuchi during the day, while facing east, following a night of fasting and prayer. But I’m not inclined to pick it at all. I’m still trying to figure out how it got there. The closest I can guess is that it either rode in on the wind or hitch-hiked in the soil with some dill that I bought at a local nursery. Unfortunately, the dill didn’t make it, but this unexpected visitor is thriving — with its airy stalks and white flower heads, sitting happily among Liatris, oregano, nasturtium and a random dahlia.

Considering this plant as a writer might, I’ve decided its spontaneous appearance is like an idea which springs up out of nowhere to crystalize a plot or connect one’s characters. That lone idea stands out in a garden of clutter and clichés, attracting passersby and hopefully, rising above the rest.

Fact is, plants do infiltrate my writing and require considerable research when mentioned. The one thing I learned is that, as a writer, you can’t be casual about plants. There are specific seasons in which they bloom, regions in which they grow, differences in species, and dates when they were imported to certain locations. So, in Tory Roof, when I say that Sarah returned to the house in 1765, to find clumps of orange day lilies growing along the field, I had to verify that day lilies were indeed common in Colonial times. And when she makes a poultice using plantain, I had to confirm that it was used to heal wounds. When in Silver Line, I mention Mormon tea growing in the crevices of an arroyo, and Ocotillo bushes reaching skyward in the dry landscape of the southwest, I do so from having seen them firsthand. And when Jared, as a student in Silver Line, sees hydrangeas “morphing from white to late-season pink behind wrought iron fences,” I was able to write that because the ‘snowballs’ in my yard also change color, and I’ve seen the confined plantings in front of Boston brownstones.

Book No. 3, Absent, however, is really testing my botanical knowledge, as my main character, Carter, is treated with some unusual elixirs in a sprawling Victorian manor amidst lush gardens and topiaries. It was important for me to learn about the psychedelic and deliriant properties of many plants and to understand the differences between those of similar appearance — such as the lovely Angel’s Trumpet (Brugmansia) and the more deadly Devil’s Trumpet (Datura) — which reminds me, if you have a green thumb, you’ll feel right at home with this book, due out soon. 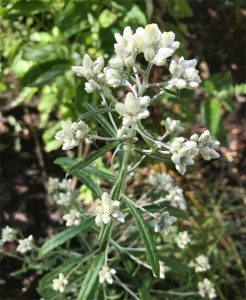