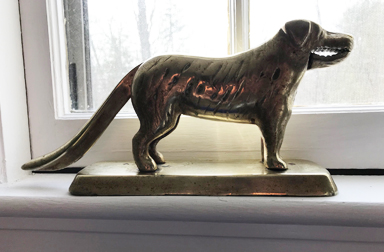 I hadn’t thought about the literary significance of polishing an artifact. We usually leave patina intact. But as I decided to clean our brass doggie doorstop, which doubles as a nutcracker, I was filled with memories and unanswered questions. With each layer of tarnish that I wiped away, I seemed to recede deeper into my past, remembering this doorstop in my family home, holding open a porch door in summer. I was told it had belonged to my mother’s father, who died when she was young.

Not having met the man, I began to wonder about him and why he would own an item such as this. It seemed somewhat frivolous for a father of five, but perhaps it was a symbol of manliness or economic success. Maybe it was a gift or traded in barter. No one ever said. And in thinking about the acquisition, I realized, I had no idea what this man did to earn a living.

I recall a sepia-toned photo of this person, sporting a moustache, in which he appeared tall and dapper, and I have fond recollections of my petite grandmother telling me how she flirted with him in the “Old Country” by ‘stealing’ his cane, while in a park. But other than that, I know little.

As I polished the surface to a subtle shine, I sensed what rubbing Aladdin’s Lamp might feel like and wondered if I should proceed. After all, that action carries the caution of “getting what you asked for.” Would I uncover details I didn’t want to know or facts that would only lead to more mystery?

A bit of research put me in touch with the realm of genies and jinns (a word I’ve always wanted to use in Scrabble, in its alternate spelling of ‘djinn’.) I guess I never realized the balance between malevolence and generosity in the jinn/genie world.

For me, much more an innocent, this polishing exercise was all good. It was tactile and therapeutic — and it let my mind wander. How did my maternal grandfather come upon this item? When did he get it? How did he use it? And why did my mother end up with it?

My mother had shared certain anecdotes from her youth, but I know there are things she didn’t say. I wondered if this dog could tell me more. After all, generations of family hands had lifted its heft to move it. Someone likely used it as intended, raising its tail to accommodate a nut in the mouth and bringing the handle down with force, to feel and hear the crack of a shell. (In thinking of this, I remember a bowl of walnuts sitting, every fall, on our living room table, accompanied by metal, hand-held nut-crackers and thin, silver plate ‘picks’ … just the kind of detail a writer craves.)

As I let my hand glide over the dog’s tail, sloping and smooth, I wondered what this critter might have seen. World War I? The Great Depression? The daily lives of a large, loud family growing up in New Jersey, among other immigrants, before grabbing a piece of the American Pie?

This dog has been a good companion. He doesn’t bark, doesn’t need to be fed , doesn’t require a walk. Instead, he’s a patient observer and collector of invisible things. He’s solid in composition, strong in stance, and durable in demeanor. Now, more than 100 years later, he’s hardly aged a day. In polishing him, the task peels back time – revealing, with each layer, a story that could be told. Might I tell of a man who came to America on a big ship, with his young bride, having only a few coins in his pocket? Might I write of my grandmother, who lied about being married, so she could get a factory job when they were being given only to men who “needed them.”

But with this dog … the curiosity lingers. Where was it made? What did it cost then? What is it worth now? I can find a few clues about vintage door stops online. Apparently, there is quite a selection of brass doggie nutcrackers on eBay, and according to some articles, many are fake. (Thankfully, this one does not have Phillips’ head screws in the base, and I know the provenance). These doorstop nutcrackers, it seems, command only a modest price, but the worth to me, is not in the mechanics but in its ability to unlock secrets. I notice examples in photographs, though, that are not as refined, with a snout cut short or a hole in the side. This leads me to believe there was considerable thought (and maybe savings) given to this selection by my grandfather or the gift-giver.

As I continue my research, I learn more about nutcrackers in general. Who knew there was a nutcracker museum? Truth is, I’ve never given much thought to nutcrackers at all, but here we are, in Nutcracker season, and ballet troupes are streaming their performances.

Like so many things, choosing to polish this nutcracker now, after years of neglect, is probably just a random gesture, but maybe it’s trying to tell me something. I return the heavy, brass dog, spiffy and clean, to its place of honor near a bedroom door, and each time I pass, its glint catches my eye. Surely this is merely a shiny object from a past I’ll never know, but then again…maybe it does contain a gentle genie trying to get out… a genie bearing creative gifts a writer can use.