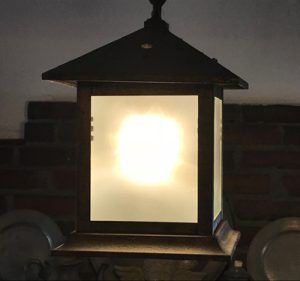 Sometimes fact is stranger than fiction, if you stop, look, and listen.

April 23, 2019 — I know the house he means. It sits at a corner, opposite a field. The front and side are obscured by overgrown bushes – lilacs, I think – and there’s a small window on the third floor. There’s an annex to the left, a garage or workshop it seems, which could easily have been horse stables at one time. The roof of the extension is tilted and caved in. The structure was built in the 1700s and is located on an historic road. If ever there were a haunted house, this could be it.

I hadn’t really been thinking of ‘spirited dwellings,’ when I struck up a conversation with Sam at a local networking event. He was a gregarious guy, a real estate agent, who works for a prominent company. He was eager to chat about the changing landscape in our suburban (still partially, rural) town. Someone next to us was talking about Tory Roof, so I gave Sam a quick summary – “real estate agent selling vintage home encounters a presence there.” I immediately clarified that this was not a ghost story, but that it allowed the reader to wonder, “what if.”

Sam was intrigued, so I asked if he had ever run into a haunted property, and he casually said yes. Now, that surprised me! While he was not personally involved with the transaction of said house, he was told by a colleague about unusual occurrences that took place there – unexplained sounds and the construction worker who ran out of the house, refusing to return. Sam did allow, that as a licensed real estate agent, if he were repping it, he would be obligated to reveal such details if asked.

I had never really thought about the impact of spirituality and superstitions on house buying, but apparently, it can be a determining factor. I have an acquaintance who claims to be sensitive to the deceased and insists on ‘smudging’ her premises with sage, in Native tradition, before moving in. This form of energy cleansing is also used by those following Feng Shui.

In talking about belief systems, Sam described one instance where prospective buyers refused to close on a purchase because the house number was foreboding according to their culture — to the point where they approached the town board to see if the number could be changed. (It could not, for emergency response reasons, so the sale fell through.) Sam also noted a situation where a sale was left pending until extended family could arrive to cleanse and bless the property, after which the sale went through without a hitch.

Knowing of homes with a history is not unusual in New England. My mother-in-law lived in a huge, antique, one-time farmhouse, that after WWI became a dormitory for nurses who worked at a local sanitorium. That explains the many small rooms on the upper floors.  Yet in all my time there, I never sensed a ghostly presence – just a keen awareness and respect for the past.

I recently ran into a woman who lives on a quiet lane in a house that used to be a candy factory, and I just learned that the basement of a local restaurant contains a working fireplace because it once was a speakeasy.

Much like the inn described in Tory Roof, Longfellow’s Wayside Inn, a few miles away, contains a room where guests leave notes in the walls to document their experiences while staying overnight. Here are some fun facts about its haunted reputation. 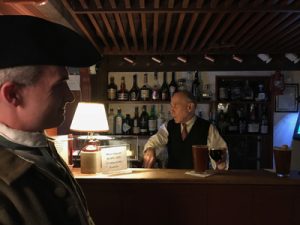 While I’ve never encountered anything ghostly there, I always feel a profound sense of the past, especially if I happen upon a muster of the Sudbury Militia in the old tavern (above). It’s like stepping back in time… which is what Sarah Sutherland does.

Nearby, Stone’s Public House, located adjacent to a railroad track in Ashland, MA, is listed on the Ghostly Register. I’ve experienced several hair-raising sensations there — the feeling of being watched by the stern John Stone painting, the vivid, frightening dream which followed that night, and the smell of cigar smoke on a crisp autumn evening. Here’s some background about its spirited past.

The Old Manse, in Concord, MA, (below) home to legendary writers such a Hawthorne and Emerson, is situated very close to North Bridge where Colonial troops marched to battle at the start of the American Revolution. 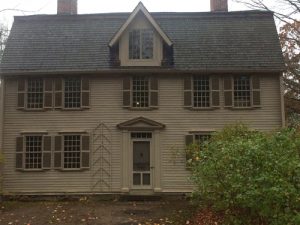 The docent claims there is a presence who rocks in the chair in the sitting room. Apparently others have stumbled upon other unexplained occurrences. (Hmmm, do I detect a Tory roof?)

Maybe a love of mystery was ingrained in me because I grew up in an old house in New York state that had a trap door in the ceiling, above a second-floor porch (inspiration for that scene where Mr. Randolph props open the access door in Tory Roof) … but I never, ever, saw what was up there. I was told as a child, it was too high to reach, and for some reason, I bought that excuse. Years later, I still wonder…

Fact is, that building had a colorful past which tangibly infiltrated my present. Imagine my excitement, when I found an 1873 ledger from the general store, once housed on the ground floor. 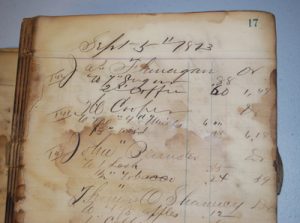 This worn, yellowed, water-stained book — beautifully scripted with brown ink — was tucked into a recess in the stone foundation of the basement, apparently having survived a fire that occurred long before my family arrived. It’s since been donated to the Amenia Historical Society.

While Tory Roof and Silver Line don’t dwell on the spooky aspects of vintage settings, I do have fun creating scenes that toy with the imagination.

From Tory Roof: “Downstairs in the dining room, the brass chandelier glowed; candles now replaced with small flame-shaped bulbs. How grand this room must have been hosting long-skirted women and powder-wigged men. A clavichord stood near an ornate Oriental screen. ‘Wonder if it still works,’ Sarah mused, pressing a key only to jump back as a clarion note rang out. Sarah was comfortable here and didn’t want to leave…”

From Silver Line: “Armed with his backpack, Jared headed toward Bay State Road for a scenic walk to the main campus. Sunlit brownstones stood in a pristine row just as they had done for hundreds of years. Hydrangea bushes, morphing from summer white to late season pink, were crammed into small gardens pressed behind wrought iron railings. A trim woman in fluorescent green yoga pants ran by with her dog in tow. In the shadows, he could see another woman, too – a figure dressed in a high-necked, cream-colored Victorian gown, standing on the stoop, sipping tea.”

For objectivity, before finalizing this post, I asked a different real estate agent, a woman who has her own real estate firm, if she had ever encountered a spirited dwelling. While she couldn’t recall anything she had represented, she did allow that a friend of hers was convinced, years after purchase, that she wasn’t alone in her house.

It’s certainly not for me to say where fact ends and fiction begins, but as a writer, I can tell you that it’s a lot of fun walking along the line where they blur.

Silver Line is a tale by truest definition. It’s a simple story, an easy read that rolls along, combining folklore and a contemporary plot to connect modern day Boston with an 1860s mining town in Colorado.

That’s a stretch, you say? Not so much when you have the benefit of bending time.

Inspiration for the historical theme came many years ago, when traveling cross-country. In that trek, we discovered tangible evidence of the past — items discarded in forgotten towns, on well-worn trails, in trash heaps. The dry desert heat preserved much of it, and I use that premise to start the story.

[The photo here shows two separate finds – an old oil can and what appears to be a plaque from a Victorian photo album. In that Silver Line is set, in part, against the political climate of the Civil War and the gilded ambiance of the Victorian Age, these two items seem to be a fitting illustration.]

In our journeys, we also stumbled upon the legend of Silverheels that has rattled around my brain ever since. Silverheels was a beautiful dance hall girl who cared for the sick during an epidemic – but surely there’s more to that story. Silver Line does not attempt to retell the legend but uses it as a springboard for likely characters and timely adventures.

Somewhere in the process, I toyed with the expression, “Hindsight is a wonderful thing.” I also thought, “Foresight is as well.” And then I asked myself: “What if we could combine the two?”

This is what happens to Sarah Sutherland’s son, Jared, as he heads off to college, and to Alexa, the young woman who befriends him. Together, they not only experience the rigors of the western frontier but come face-to-face with a modern mystery:  the unsolved Isabella Stuart Gardner Museum heist of 1990, whose artwork has never been found. Jared, an aspiring journalist, is bent on finding it.

How could I possibly interweave the two? Wait and see.

I must admit, I did have fun finding links, lines, and coincidences… (some even surprised me!). I dared to connect dots and make assumptions. And like any character with extrasensory ability, I tried to see things that others don’t. I also drew on personal experiences — remembering the feel of wide-open spaces in the Rockies and the awe of strolling through dark museum rooms in the presence of Old Masters. Hopefully, you’ll experience and enjoy these vivid impressions through my words.

For those of you who ‘fell in love’ with Sarah in Tory Roof, fear not. She’s still here – just in the background. The timeline is 7 years later, and Jared is 18.

Ideal for the young-and-in-love (New Adult) … and for those who remember what it was like. 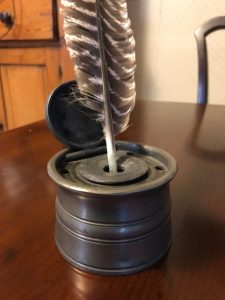 I grew up in a small town in New York state where my family owned a grocery store—and where I was often enlisted to help.

One summer, as I was shrink-wrapping slices of ham, I was consumed by the sweet, smoky smell emanating from the meat. I immediately felt a sense of the past that conjured up images of campfires and stone hearths. I “saw” Native American women and pioneering men taming the Plains… hardy Colonists and hungry soldiers trying to survive snowy winters. In my mind, there were humble cabins with hard dirt floors, sod huts, and cookstoves being used under the stars.

Of course, none of this aligned with my past, since my Grandparents, like so many others, had come to this country by ship at the turn of the century. So where did these subliminal images originate? Why did they emerge at this random time? Perhaps they were embedded in my DNA, imprinted by prior generations who lived similar lifestyles. Perhaps I had read about these things in musty books borrowed from the one-room library in my home town. Maybe I was simply letting my imagination run wild. Or could it be that I was tuning in to energy that lingered from long ago?

Working in Boston as a young professional, I had a similar experience — transported one night by the smell lifting off a chestnut vendor’s cart. The smoke, mingled with the briny air coming in from the ocean, made me think of sea captains and women on widows’ walks. I felt an acute sense of history, as if I were a first-hand witness. That’s not to say I experienced a physical manifestation as my characters do, but the sensation was so strong and pleasantly persistent, that I wanted to capture it.

Years later, standing in the smokehouse at George Washington’s Mount Vernon,  I was again struck by that same sense of déjà vu. At that point, I knew a story had to be told.